Notify me when available 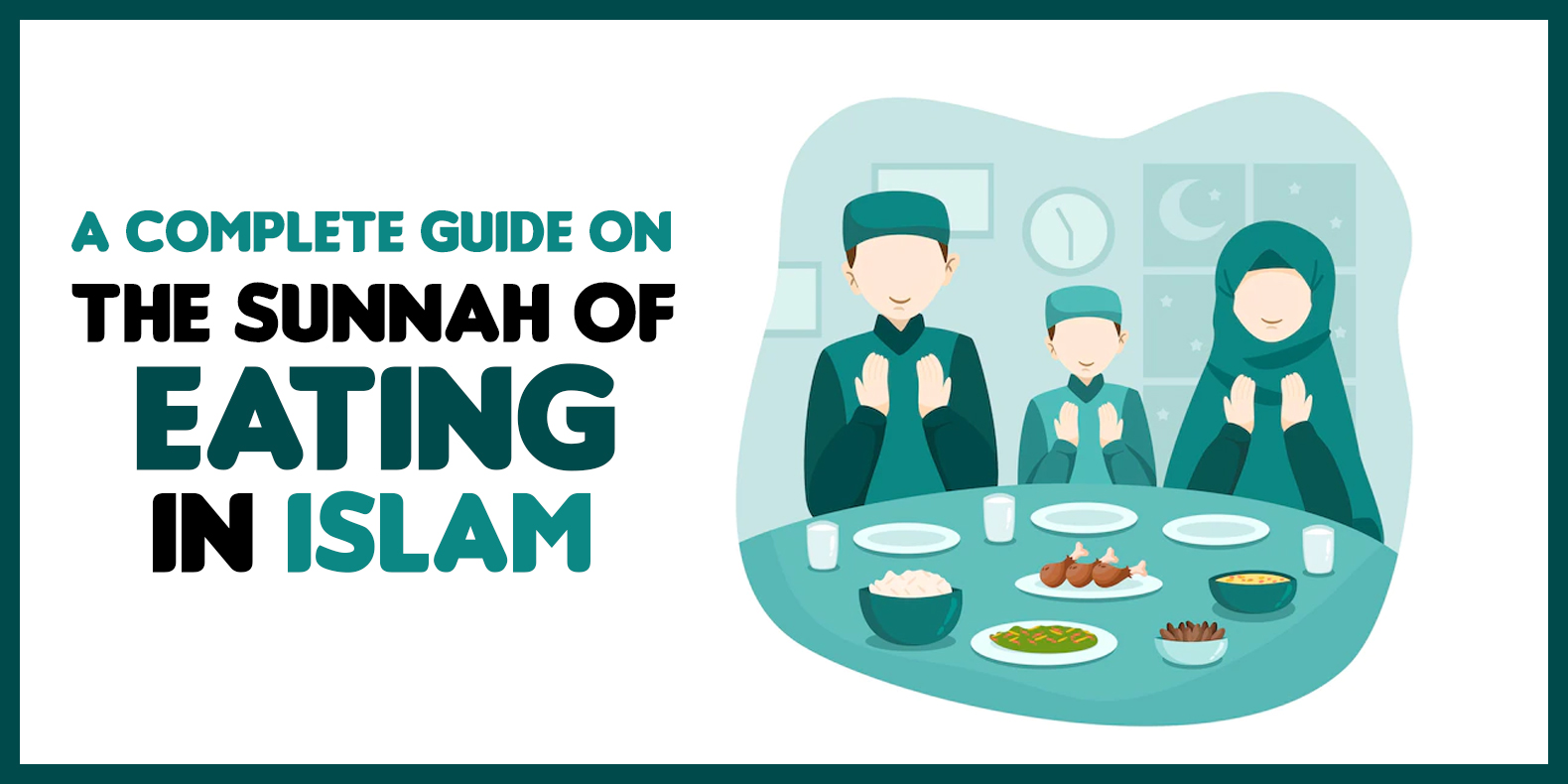 The Sunnah of Eating in Islam – A Complete Guide to Follow

Posted by Mubarak Deals
The Sunnah of Eating in Islam

Sunnah/Etiquettes of Eating and Drinking Good Foods to Eat What does the Quran say about food? What does Islam forbid eating? Haram food for Muslim Halal foods in Islam

A true Muslim must follow the Sunnah of eating in Islam. However, the core problem is that there are endless narrations of how the Prophet (SAWS) ate food. One must learn the etiquette of eating to ensure their religious beliefs are protected. The Muslim religion diet is specific and both adults, as well as children, must learn the Sunnah for eating food and build good Muslim habits.

This article explains the 21 Sunnah of eating in Islam, the Halal food list in Islam as well as Haram food items. We have also explained the Quran’s look on food later in this article.

Sunnah/Etiquettes of Eating and Drinking

Islamic scripture outlines food items that are Halal and Haram in Quran surah and Islam dietary rules. The Prophet (SAWS) Muhammad’s (SAWS) characteristics and actions were coined as-Sunnah and guide a Muslim to lead a successful, peaceful, and productive life.

The Sunnah are the manners of eating and drinking in Islam and are as follows:

1. Wash your hands and clean your mouth.
Eating from dirty hands and mouth is wrong as it may lead to contamination. The Prophet (SAWS) used to wash his hands and gargle before and after eating.

5. Use right hand while eating and drinking

Using the right hand while eating and drinking is the ideal way taught by the Prophet (SAWS). The left hand is believed to be the hand of Satan and against the table manners in Islam.

6. Eat from the front

The Prophet (SAWS) always ate from the front to ensure optimal eating manners and avoid mess while eating. The ummah must follow in his footsteps and do the same while eating the Sunnah diet.

Complimenting tasty food is important said the Prophet (SAWS) and would do so whoever someone offered him tasty food to eat. This would make people around him happy and content.

8. Do not criticize food

Criticizing the food was not one of the Prophet (SAWS)’s traits; he would simply leave any food item he did not like. This way he was able to avoid hurting the feelings of someone who would cook and bring food for him.

9. Start passing the dishes to the person sitting on the right

The table etiquette that the Prophet (SAWS) followed was to pass the dishes to the person sitting on the right side.

The last messenger of Allah used to cover the water pot after drinking water from it. This is one of the Islam foods laws that must be followed by Muslims all across the world.

13. Share food
As a way to increase harmony among Muslims, the Prophet (SAWS) said to share food with others. He used to do the same with his Ummah and hence

15. Wipe off the dishes
The Prophet (SAWS) always wiped his dishes after eating Muslim Halal food. This was done to ensure that no food goes to waste and that all the nutrients from the food are received by the person eating it.

16. Lick your fingers
Licking fingers is what the Prophet (SAWS) said is a way to receive all the nutrients from the fruit along with Allah’s blessings. If you choose to clean fingers from a cloth, this would leave you devoid of those blessings.

17. Never waste food
Wasting or discarding food is wrongdoing as per the Prophet (SAWS). It is better to distribute that food among the needy persons. This is how you can minimize the wastage of food and make more food available for those in need.

18. Overeating is a wrong habit
Overeating must be avoided said the Prophet (SAWS) and he also asked his followers to do the same. When you indulge in overeating, it leads to health issues and laziness while decreasing the amount of food available to others.

19. Say praise of Allah after eating
Prophet (SAWS) Mohammad always praised Allah after consuming food. Allah is the provider of food and one must thank him after eating food.

21. Do Miswak
One must never have a foul-smelling mouth and hence must do Miswak. There is specific timing to do Miswak including before and after eating food and before entering a Majlis.

1.Eat Lentils
All the members of the Ummah must consume lentils as they were eaten by the Prophet (SAWS) Mohammad frequently. Lentils are a part of a healthy diet in Islam as they have low cholesterol levels as well as easy digestive properties.

2. Eat Dates
Dates offer a wide range of health benefits and hence the Prophet (SAWS) included them in Islam’s dietary rules. He used to eat a lot of Dates and taught Muslims to do the same.

Apart from this, the Prophet (SAWS) also guided his followers to avoid eating in rush or eating food that is piping hot. The 20 Sunnah of eating in Islam ensures that the food is distributed equally among all and also the health of those who consume it is well-maintained.

What does the Quran say about food?

A Muslim must eat to his/her senses. Also, the entire focus must be on food and one must not watch phone and television while eating food.

Quran also says that eating in excess is a wrong habit.

“And He enforced the balance. That you exceed not the bounds; but observe the balance strictly, and fall not short thereof.” [55:7-9]

“No human being has ever filled a container worse than his stomach. The son of Adam needs no more than a few morsels of food to keep up his strength, doing so he should consider that a third of his stomach is for food, a third for drink, and a third for breathing” [Ibn Maja].

It is also important to eat all varieties of food instead of sticking to red meat, vegetables, or white meat.

What does Islam forbid eating?

There is also Halal food in Quran as well as food that is forbidden. The forbidden food items are Haram and are against the Muslim dietary laws. As per the Quran, any meat procured from a dead animal, blood, Pig meat as well as any food item that is devoted to someone else than Allah is Haram in Islam.

Meat, fruit, vegetables, and eggs are Halal in Islam. However, Halal meat meaning in Islam is also different and a Muslim can only consume the meat that comes from a slaughtered Halal animal. Milk and dairy products including cheese are considered Halal.

A detailed Halal food list in Islam is as follows:

Added to cart successfully. What is next?

Not a member? Register

By completing profiles, we can ensure you get the best service